Rhode Island Boundaries was first issued in 1936 as a special report of the Rhode Island State Planning Board. The maps were designed by John H. Cady and drawn by William A. Perry, a staff artist of the planning board.

We use the first two maps from the book that coincide with the timeline of Roger Williams’s life, adding dynamic color elements to show the sequence of the county, town, and colonial boundaries of Rhode Island and Providence Plantations as they were developed from the first settlement by Roger Williams in 1636 to 1703. Our text in the year-by-year section is based upon the research in Rhode Island Boundaries, although several spellings and dates have been corrected. 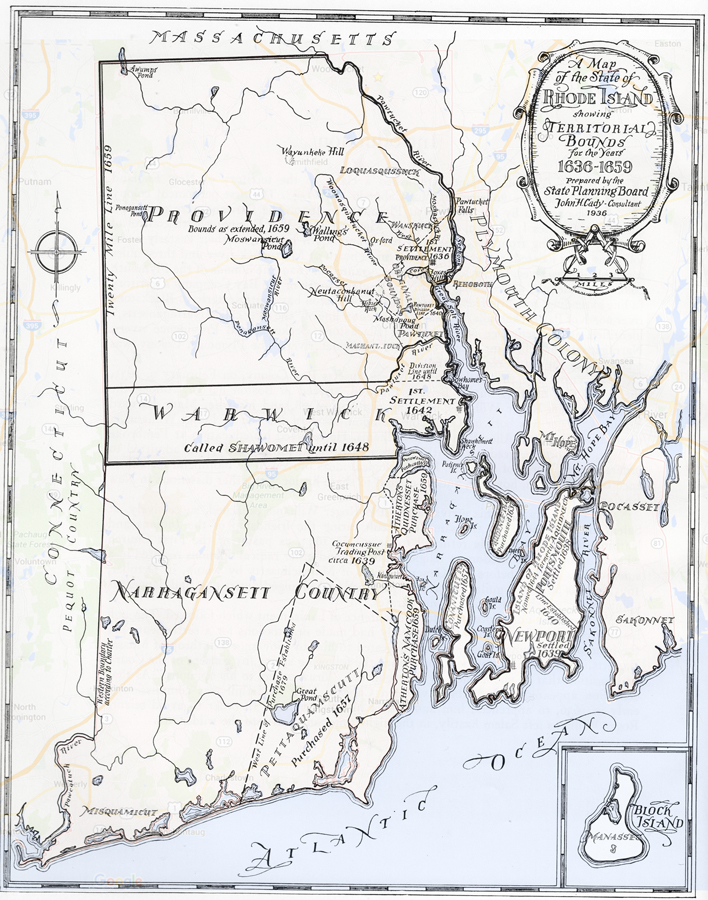 1636
Providence was settled in 1636 by Roger Williams on land which he secured by verbal transfer from Canonicus and Miantonomi, chief sachems of the Narragansetts, and which was described as "the lands and meadows upon the two fresh rivers called Moshassuck and Woonasquatucket.
1637

In 1637 Roger Williams obtained a formal deed for this territory by which the bounds were established “from the rivers and fileds of Pawtucket, the great hill of Neutaconkanut on the north-west and the town of Mashapaug on the west, reaching to the Pawtuxet River, as also the grass and meadows upon Pawtuxet River.”

Portsmouth (as it was later named) was settled in 1638 by Anne Hutchinson and William Coddington, who purchased the island of Aquidneck (the name of which was changed in 1644 to Rhode Island) form the Indians and laid the foundation of the new town at Pocasset, near the north end of the island.

In 1639 another settlement was made at the south end of Aquidneck island at Newport, by seceders from Pocasset.

The bounds of Providence were confirmed and extended by Miantonomi in 1639 to include the territory “up the streams of Pawtucket and Pawtuxet without limits.”

A trading post was established at Cocumscussoc, on Narragansett Bay in 1639.

The division line between Portsmouth and Newport was established in 1640.

Miantonomi, about the year 1642, established more specific bounds for the 1637 Providence deed as follows: Sugar Loaf Hill, Bewit’s Brow, Observation Rock, Absolute Swamp, Ox-ford, and Hipses Rock. Those bounds cannot now be accurately determined. Sugar Loaf Hill was doubtless north-west of Pawtucket, and possibly at Lonsdale; Bewit’s Brow was somewhere on the west side of Moshassuck River; Observation Rock was probably in the town of Lincoln; Absolute Swamp may have been in Wanskuck; Ox-ford was probably on the Woonasquatucket River; and Hipses Rock was undoubtedly a high rock west of Neutaconkanut Hill.

In 1642 Warwick was settled by Samuel Gorton who, with eleven companions, purchased Shawomet, the territory bounded on the east by the waters from Sowhomes Bay (Occupasspawtuxet Cove) to Shawhomett Neck (Warwick Neck), and extending westward twenty miles. In the same year John Greene purchased a tract at Occupasspawtuxet, north of the cove.

In 1644 Roger Williams obtained from the Earl of Warwick a charter to form the “Colony of Providence Plantations in Narragansett Bay in New England,” which united the settlements of Providence, Portsmouth, Newport, and Showmet (now Warwick). By the terms of this charter the lands were bounded “northward and north-east by the patent of the Massachusetts, east and south-east on Plymouth patent, south on the ocean, and on the west and north-west by the Indians called Narragansetts; the whole tract extending about twenty-five English miles into the Pequot River and country.”

Warwick was called Shawomet until 1648.

The colony was disrupted, Newport being governed by Coddington, and Providence and Warwick continuing as Providence Plantations. With the revoking of Coddington’s Commission in 1654, however, the colony was reunited.

The territory of Providence was extended to include all of the present Providence County west of the Blackstone River, with the west bound “twenty miles west of Foxes Hill,” by conveyance on the part of Cojonoquant, successor to Miantonomi, in 1659, and by deeds to the town from certain other Indians.

Potowomut Neck, south of Greenwich Bay, and Nanequoxet, in North Kingstown, were purchased in 1659.

Fox island was purchased by Randall Holden and Samuel Gorton in 1659.

The territory of Rhode Island colony in 1659 included the towns of Providence, Warwick, Newport and Portsmouth; eight islands in addition to Rhode Island, in Narragansett Bay; and the Narragansett Country, the latter claimed also by Connecticut. 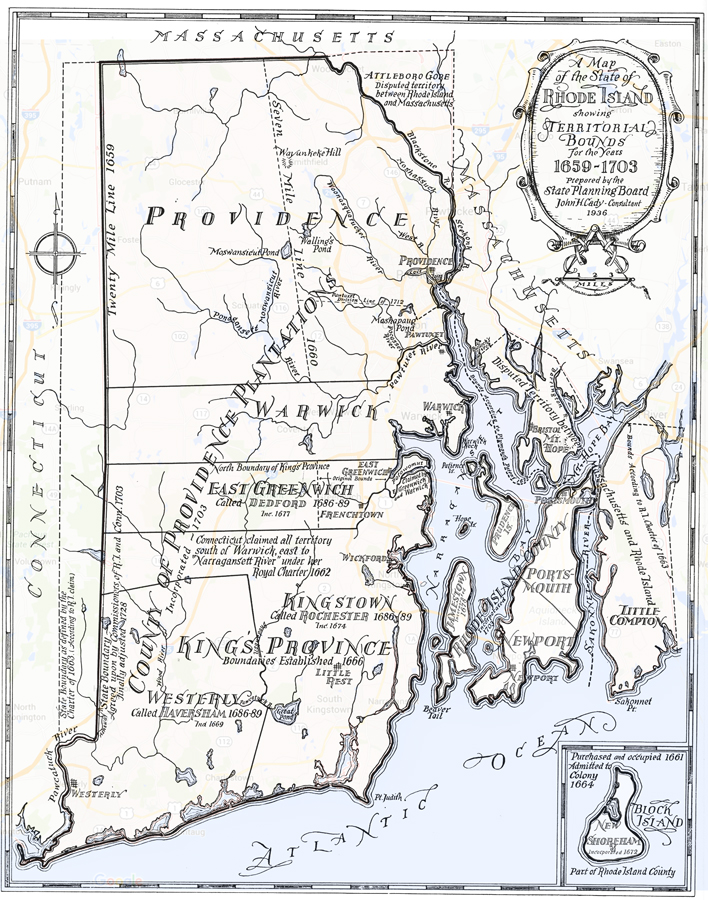 1662
Conneticut claimed all territory south of Warwick, east to the "Narragansett River" under its royal charter.
1663

In 1663 Charles II granted a new charter to "The Governance and Company of the English Colony of Rhode Island and Providence Plantations in New England in America." The overlapping of the east and west bounds of the colony defined by this charter, upon those established by the Plymouth patent of 1629 and the Connecticut charter of 1662 respectively, caused disputes which continued for many years before adjustments were made.

The Plymouth territory, under its patent, extended westerly to include "one-half of the River called Narragansetts," interpreted to mean Narragansett Bay. Included in the overlapping bounds were the present towns of Cumberland, Barrington, Warren, Bristol, Tiverton, and Little Compton.

1664
Block Island admitted to the colony.
1703
After continued disputes with Connecticut, a Board of Commissioners of the two colonies in 1703 upheld the decision made by the Arbitrators in 1663 and established the bounds as shown.