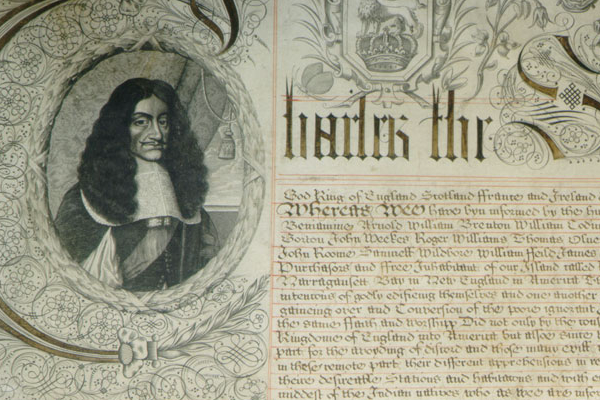 Roger Williams knew that it was not enough to create a colony of free; thinking individuals – for Rhode Islanders to survive, they needed to work together for the common good. Despite his own resistance to authority earlier in his life, he was able to articulate a compelling vision of community and to persuade others to work toward it. With a pragmatic approach and a willingness to set an example, he converted his imagined ideal into a working reality.

Roger was a legendary defender of individual freedoms and human rights, but he was no less committed to the idea that we depend on each other. Community was as important to him as his own personal well-being. After coming to Rhode Island, he might easily have tried to buy land for himself, to protect his privacy or make a profit, the way so many others did. Or he might simply have declared new rules of religion and government, to ensure that his new colony would only attract others just like him.

Instead, he promoted a very open vision of this place, open to all, as long as they obeyed the law and worked for the common good. “The common good” simply meant whatever needed to be done at a given moment: helping a neighbor repair a building, or making sure everyone had enough to eat, or giving a sermon, or defending Providence against attack. The original settlers of Providence wrote out a statement of their mutual responsibilities:

“We whose names are hereunder, desirous to inhabit in the town of Providence, do promise to subject ourselves in active or passive obedience to all such orders or agreements as shall be made for public good of the body in an orderly way …”

But Roger also discovered that Rhode Island had a common good too, larger than that of Providence. When others were banished from Boston, Roger helped them to buy their own land from the Natives and build new settlements like Portsmouth and Newport.  That would turn out to be helpful to him – when Rhode Island received its charter from King Charles II in 1663, it was the result of years of hard work by leaders from both Newport and Providence, working together.

To define the common good, Rhode Islanders developed forms of local government, which they called “democracy” even before the other colonies were using that term. Although democracy was a constant challenge, over time the different towns of Rhode Island eventually cooperated with each other and accepted that they were stronger together than apart. Inside Providence, Roger’s home town, democracy could be difficult as well – he wrote several letters to his town asking them to join together as a single, healthy community, which he compared to a “ship of state.” That term is still used often by presidents to define our country and the responsibilities we all owe to each other. Roger didn’t personally approve of or agree with everyone who came to live in Rhode Island. But he understood that he could never get his way entirely, and that all of the different kinds of people here contributed in their own way to the common good.