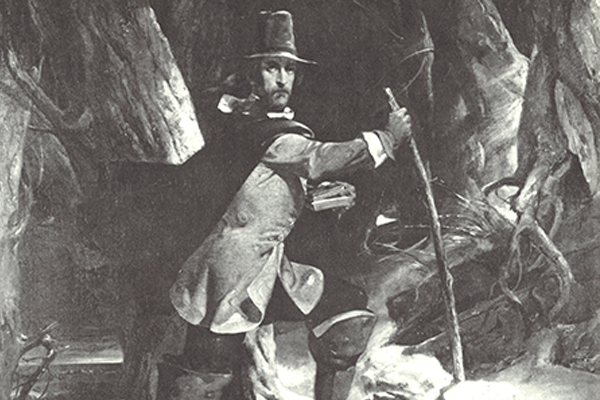 Having been banished from Massachusetts Bay, Roger Williams turned his new community into a model of respect for other beliefs, accepting those with whom he did not agree, in religious and political matters, as long as they were good citizens and worked for the good of the colony.

In addition to founding a place, Roger Williams helped to lay the groundwork for a great principle. For that reason, his legacy matters to people who will never come anywhere near to Rhode Island.

Freedom of conscience – sometimes called “freedom of worship” or “religious freedom” – means simply the freedom to worship in one’s own way, including the right not to worship. It could also be simplified to a single word – co-existence – except that word implies one group, in power, tolerating another. Given how loose the original authority was in Rhode Island, and how much depended on the support given by Native Americans, it is perhaps more accurate to simple focus on the freedom.

Before the founding of Rhode Island, religion had been a tremendously divisive force, separating nations and groups within nations. One of the keenest insights of Roger Williams was that “a wall of separation” could be built between religion and government. The separation of church and state has become a bedrock idea of the United States, enshrined in the first amendment to the Constitution and accepted by billions around the world as a reasonable arrangement that endangers neither religion nor government.

For most of recorded history, it had not been so. Before 1636, nearly every government on earth assumed responsibility for spiritual as well as political concerns. Even the Puritans who founded Massachusetts aspired to fuse them.  Although they bitterly resented the way they had been persecuted by religious authorities in England, they never thought to dissolve the connection between church and state, they simply hoped to do it in their own way.

Roger Williams was different.  From the moment of his arrival, he raised troubling questions about the new “Bible Commonwealth,” as Massachusetts liked to think of itself, and the way it merged civic and religious authority. He disliked specific beliefs and practices – for example, taking land from Native Americans, refusing to separate from the Church of England, or holding on to rituals inherited from the Church of England.

But he also disliked the way in which these beliefs were enforced by a government that combined religious and political authority into one. Throughout the story of his estrangement from the colony’s leaders, we hear that he was holding meetings in his home at Salem, where he could speak freely on the subjects that bothered him, and preach on religious topics within a structure that was not controlled by anyone else.  That kind of free exercise of thinking – freedom of speech as well as of religion – was anathema to the leaders at Boston (who would suppress similar sorts of gatherings led by Anne Hutchinson soon after).  It came naturally, however, to a disciple of Sir Edward Coke, whose most famous maxim was, “a man’s home is his castle.”

When he was forced from his, Roger took care to build a stronger architecture of free thinking at Providence. There, people were far freer to worship according to their consciences. Even the groups that Roger Williams found disagreeable – Quakers, for example – were permitted to stay in Rhode Island. By the end of the 17th century, Jews were living in Newport, proving that even non-Christians were welcome in a colony that was noticeably different from its neighbors.

Throughout his long life, Roger Williams stood up for this principle. It was hardly a passing fancy. He proclaimed it before he was banished; he defended it after he was banished (especially in his long set of exchanges with John Cotton), and to the end of his life, he was writing about it in his letters. In one of them, from 1670, he wrote to a governor of Connecticut, proposing a series of debates around New England, and argued that “there is no prudent Christian way of preserving peace in the world but by permission of differing consciences.” To make the point even stronger, he added, “forced worship stinks in God’s nostrils.”

That freedom has never stopped setting an example. Although we cannot say with certainty that Rhode Island affected the thinking of the founders at the time of the Constitution, it did furnish an example of a colony that had survived and even prospered without an established religion. As the United States grew into a world power, this particular freedom (which was not historically supported by the British) grew to be recognized and practiced around the world -- not everywhere, and not with perfect consistency, but often enough to be recognized as a fundamental human right.

In the 20th century, the same idea was written into the founding documents of the United Nations. Article 18 of the Universal Declaration of Human Rights, issued in 1948, proclaims that “everyone has the right to freedom of thought, conscience and religion; this right includes freedom to change his religion or belief, and freedom, either alone or in community with others and in public or private, to manifest his religion or belief in teaching, practice, worship and observance.”

But despite these high-minded principles, religious differences still cause complications for millions of people around the world. We should never minimize how difficult this simple freedom can be.  In some countries, it is illegal to worship in a way that is different from the official religion of the state. In other countries, like North Korea, it is illegal to practice religion at all.

Each year, the U.S. Department of State issues a report on religious freedom around the world. We should never minimize the value of this simple freedom.

Even in highly-developed parts of the world, differences can quickly flare up over religious forms of clothing, or public displays of religious symbols on state-owned property. Rhode Island has seen many such controversies, including well-publicized situations involving Christmas trees at the State House and around the state’s cities and towns. Some of these cases have gone to the highest levels of the judicial system.

In 1984, in the case of Lynch vs. Donnelly, the Supreme Court ruled narrowly (5-4) that a display of Christmas imagery by the city of Pawtucket did not constitute a violation of the separation of church and state.

In 2012, in Ahlquist vs. Cranston, the U.S. District Court for Rhode Island ruled that a “School Prayer” banner in Cranston West High School did constitute a violation of the separation of church and state.

In other words, Rhode Island continues to be a place where people think hard about these important issues, argue about them, resolve them, and then move on. That seems to be much in keeping with the spirit of Roger Williams.