What is Narragansett Bay?

Narragansett Bay is the defining feature of Rhode Island, the body of water at the heart of the state, near all of the different islands, pieces of shoreline, and inland areas that make up this unusually-shaped state.

Without Narragansett Bay, Rhode Island would be quite a lot smaller than it is. Famously, it’s the smallest of the fifty states, but it’s also watery.  Rhode Island is the third-most watery state – 33.1% of its territory is water, after only Hawaii (41.2%)and Michigan (41.5%).[1]  What little land we have is usually pretty close to Narragansett Bay.  But it’s always changing – at high tide, our land area is even smaller!

Narragansett Bay occupies 147 square miles; but it’s not as easy to define as it looks on that map of Rhode Island. Throughout the centuries, there have been different definitions of the Bay, larger and smaller, eastern and western, and these definitions have affected the state’s sense of its boundaries.  Some early Rhode Islanders identified “Narragansett Bay” as the passage between Jamestown and Narragansett and insisted that the Sakonnet River had nothing to do with the Bay. Others claimed that Narragansett Bay went all the way to Cape Cod and included Buzzards Bay. Some might still argue that the waters near Providence are not part of the Bay; it does not really begin until it expands, to the south of Prudence Island. Still others might claim that it goes all the way up to Worcester and Taunton, in Massachusetts, because of the Blackstone and Taunton Rivers that feed the Bay. 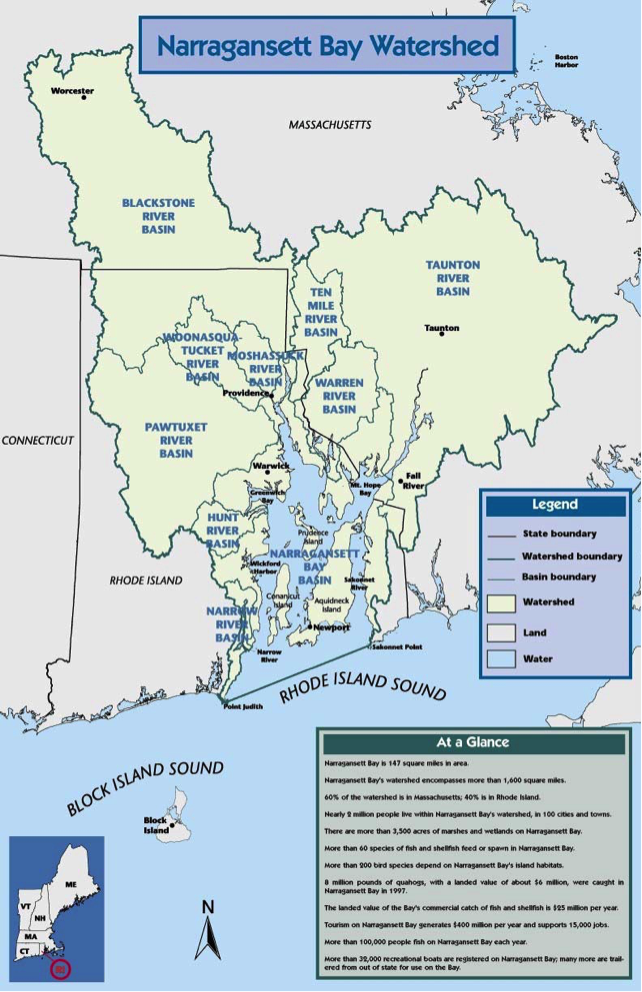 To know those rivers helps to give a better definition of the Bay – it’s not just the water that we see on a map of Rhode Island, it’s the “watershed” – all the rivers that drain into the Bay.  That makes the Bay seem larger; and it is surprising to know that more people from Massachusetts live in the Bay’s watershed than people from Rhode Island.

Despite these changing definitions, we know a lot about it.  On average, according to Save the Bay, it holds 706 billion gallons of water.  Its average depth is 26 feet.  Every twelve hours, the tides rise and fall 3-4 feet.  The entire bay is flushed out every 26 days.  You could say that Narragansett Bay acts as Rhode Island’s lungs as well as its heart, helping us to breathe better air, and to clean the pollutants that flow down the many rivers that empty into the Bay.

Although the Bay is versatile and resilient, it is also vulnerable, as recent storms and surges have shown.  If sea levels rise, it will bring yet another round of change to the Rhode Islanders who live so close to this essential body of water.  And to the many species of wildlife who also call the Bay home.  More than 350 kinds of birds have been seen here.

Over the years there have been many wonderful maps, photographs, and satellite images of Narragansett Bay.  Of course, the Native Americans knew it very well for thousands of years before Roger Williams came here.  Many of the words he gathered from the Narragansett describe their lives near the Bay – the fish and shellfish they ate, the boats they built, the wampum they made from seashells.  Roger deliberately chose a place near the Bay for his trading post, so he could travel there by water or land.  He also came to Providence by water, as we can see in the City Seal. 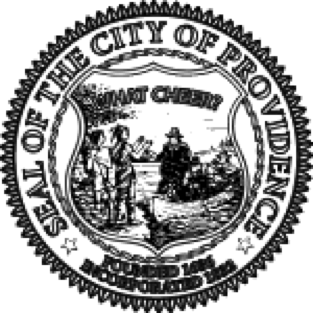 To be near the Bay was important for all of the early Rhode Islanders, including the Natives.  Roger admired their skill on the water, and wrote, “it is wonderful to see how they [the natives] will venture in those Canoes.”

More than a hundred years before Roger Williams came here, an Italian explorer named Verrazzano came to the Bay, which he called “Refugio,” because it reminded him of a refuge – exactly what it became for Roger Williams.  This Gallery of Maps show how different Narragansett Bay has appeared to the mapmakers over the years:

Visit our interactive page for Narragansett Bay with images and videos >>

To see the Bay in a variety of different ways would not have surprised Roger Williams – this place was always supposed to be a meeting place of different kinds of seekers.  Even before he was banished, Roger Williams knew that he wanted to be near Narragansett Bay to start a new life.  Even centuries later, there is something about this free space – an ever-shifting mixture of water, land and air – that liberates people.

Activities (from Save the Bay)

Andrew Lipman, The Saltwater Frontier: Indians and the Contest for the American Coast

Christopher L. Pastore, Between Land and Sea: The Atlantic Coast and the Transformation of New England

What a Difference a Bay Makes

For more about Narragansett Bay today, we encourage you to check out Save the Bay and its wealth of educational resources.