Putting Rhode Island on the Map 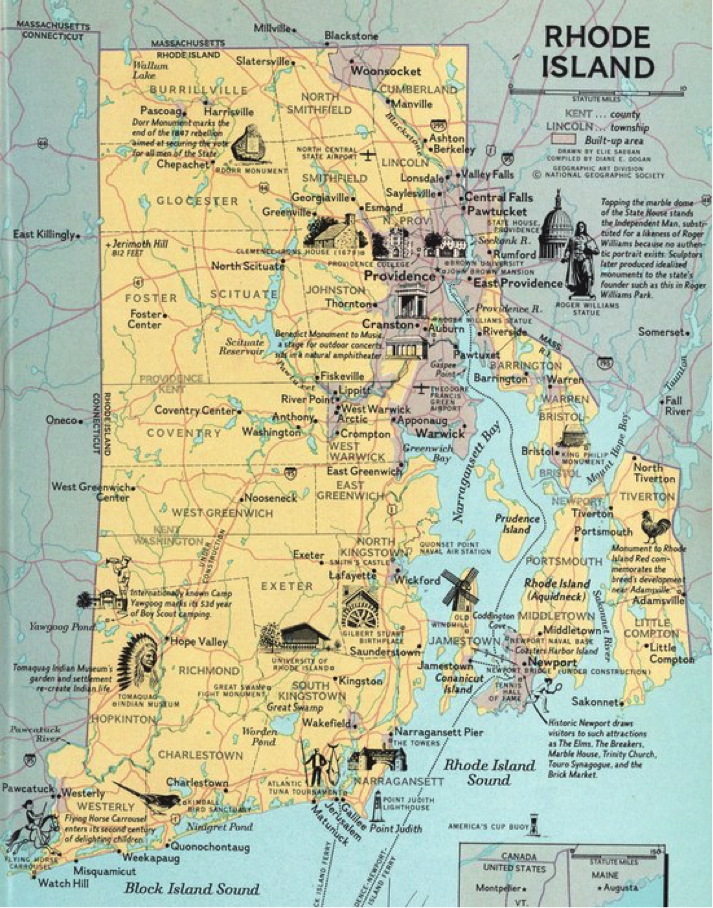 Part One:  A Dot on the Map

Rhode Island is famously the smallest of the fifty states.  From far away, it can look like a dot upon the map, hard to find between Massachusetts and Connecticut.  But up close, that dot can be surprisingly dense with information.  Maps add another layer to the story of Rhode Island’s founding, and convey how hard it was to invent a colony from scratch.

Roger Williams pioneered a place as well as an idea, and the two were linked.  Narragansett Bay was in many ways the perfect place to launch a free-thinking experiment.  But its desirability created constant problems for Roger, and for much of his life, he had to defend his land against aggressive rivals who did not want to see Rhode Island become a recognized location.

Where, exactly, did Roger think he had come to?  How did he begin to define it as a new place on the map, with a name, and boundaries?  All of these questions were complicated in 1636, when he arrived at a location that was not clearly a part of either Plymouth, Massachusetts Bay, or Connecticut, and also overlapped with Narragansett and Wampanoag claims.

Of course, Roger Williams did not “discover” Rhode Island.  It goes without saying that native peoples had been living here for many thousands of years.  But Europeans had been here as well.  An Englishman, William Blackstone, moved into the area just before Roger Williams, though he never sought to establish a colony.  More than a century earlier, in 1524, Narragansett Bay was charted by an Italian explorer, Verrazzano, sailing for the King of France.  He described it as a beautiful place, and called it “Refugio,” a refuge – much as Roger Williams would describe it.  The first map of Narragansett Bay was included in a book that was published at Venice in 1556, based on Verrazzano’s discoveries.  It is difficult to see the resemblance, but it is there all the same. 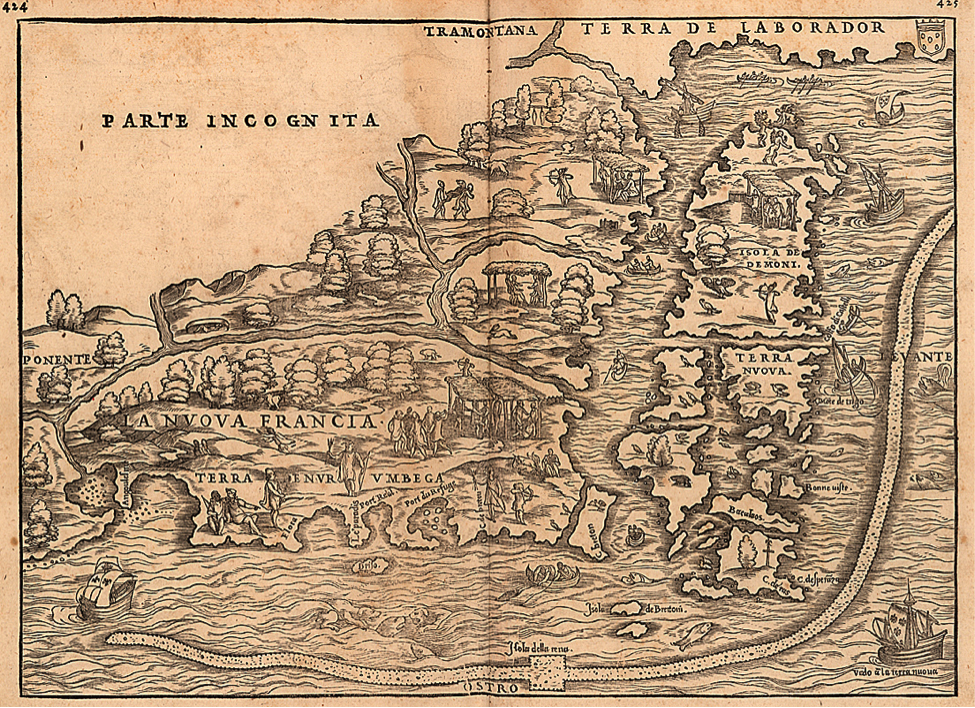 In the 17th century, many more maps were created, as the Dutch came to New York, the French came to Canada, and the English came to New England.  These maps began to show a better understanding of the land, but they almost always ignored the indigenous peoples, and exaggerated claims of ownership.  For example, the Dutch often put Narragansett Bay inside their area of control, completely ignoring the fact that Roger Williams was there.  In this map, they decided that the western half of Rhode Island belonged to them: 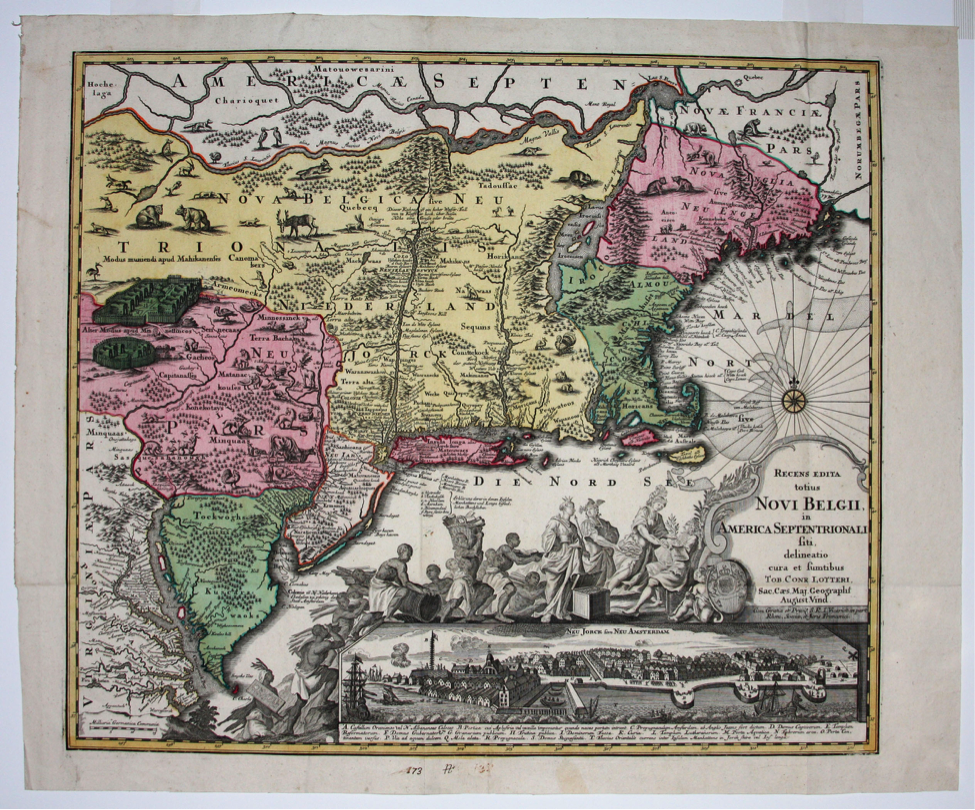 In Massachusetts, Rhode Island was only grudgingly acknowledged to exist.  Throughout his life, Roger was forced to defend his tiny colony from constant harassment from all sides, as new settlers disputed land ownership with him, and Massachusetts and Connecticut tried to take pieces of Rhode Island for themselves.  Many of these tensions can be seen in the maps.

This map from 1677 makes it look very much like it belongs to Massachusetts (the map is oriented sideways).  One can imagine the exasperation Roger Williams must have felt, after his life’s struggle to create Rhode Island.  It is almost as if, by denying Rhode Island as a place, the mapmakers were trying to deny the forms of freedom that were linked to it. 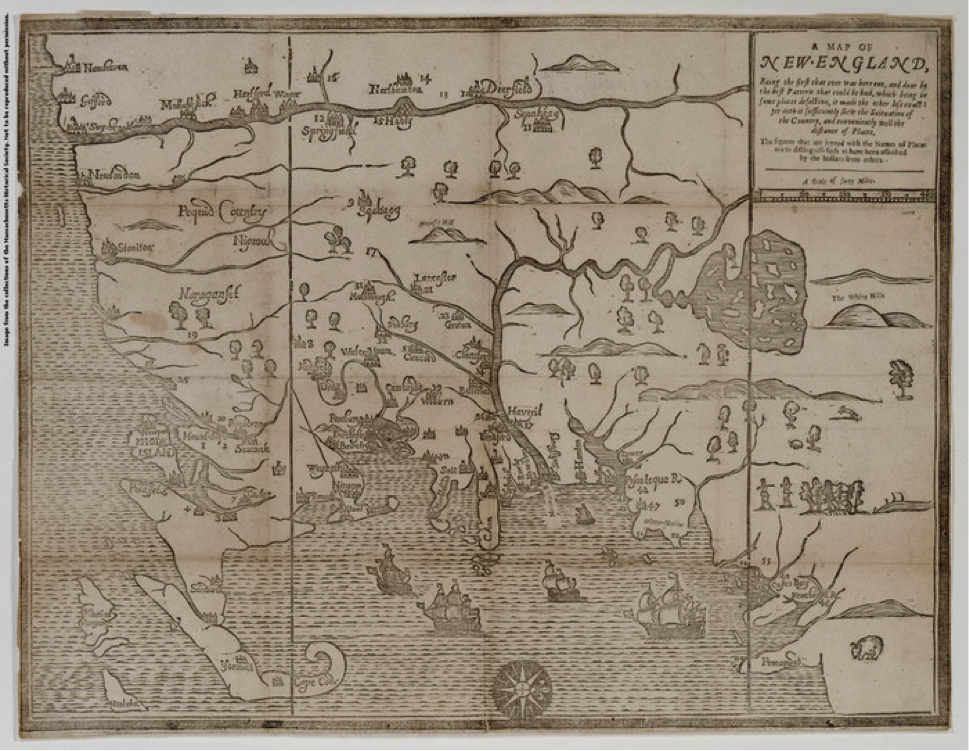 Well into the 18th century, Rhode Island could be very hard to find on the maps.  If you zoom into this English map [http://www.oshermaps.org/search/zoom.php?no=632.0001#img0], from 1732, you will have trouble finding Rhode Island.  Somehow the mapmaker placed Narragansett Bay in the Plymouth colony (which no longer existed), and invented a town called “Eastham” below Warwick.  Can you find it?  There has never been a town with that name in Rhode Island.

But slowly and surely, a recognizable Rhode Island began to emerge.  Boundary commissions were created by the British to define the colony’s borders, a process that continued well into the 19th century.

One of the most beautiful maps of Rhode Island ever created was this one, drawn in 1777 by an English surveyor named Charles Blaskowitz.  During the American Revolution, Rhode Island was close to the front lines and mapmakers needed to understand the land for military reasons.  But as beautiful as it is, the map does not come close to showing all of Rhode Island. 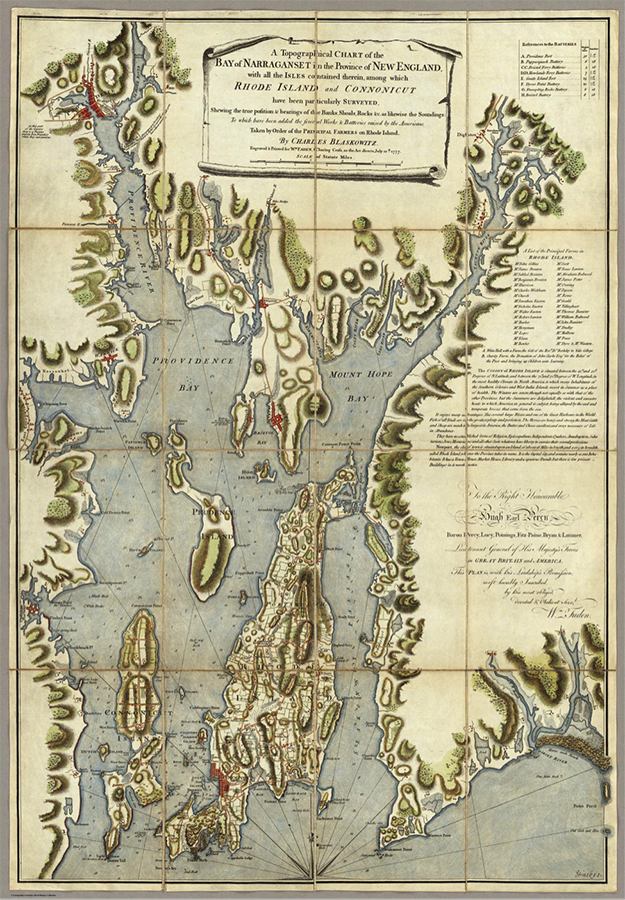 Providence was growing quickly in these years, and needed maps of its own.  Shortly after Roger arrived, it was a very small community of settlers, as imagined by a later mapmaker: 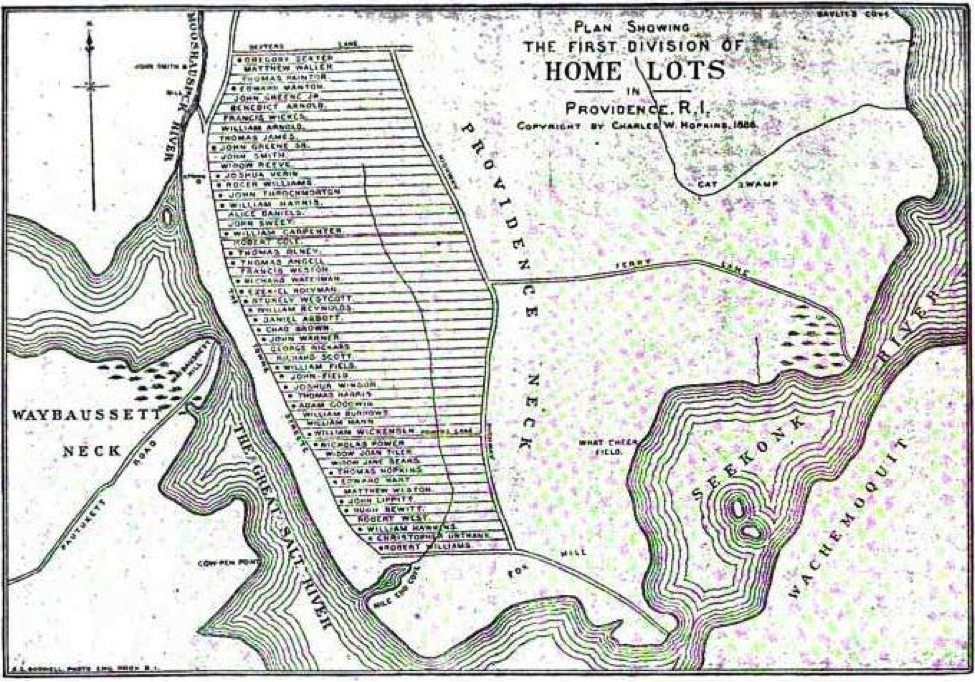 [Source:  Edward Field, State of Rhode Island and Providence Plantations at the End of the Century: A History (Boston: Mason, 1902)

In 1777, a fascinating map was carved into a powder horn

The earliest paper map of Providence was drawn in 1790. 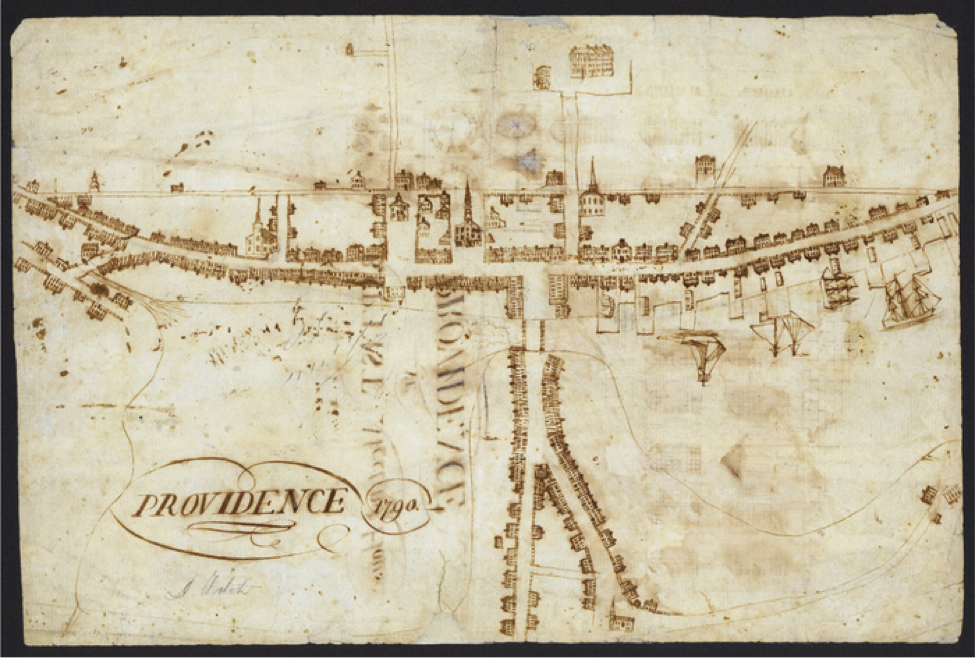 This is a later map, of roughly the same scene, created for a book in the 20th century: 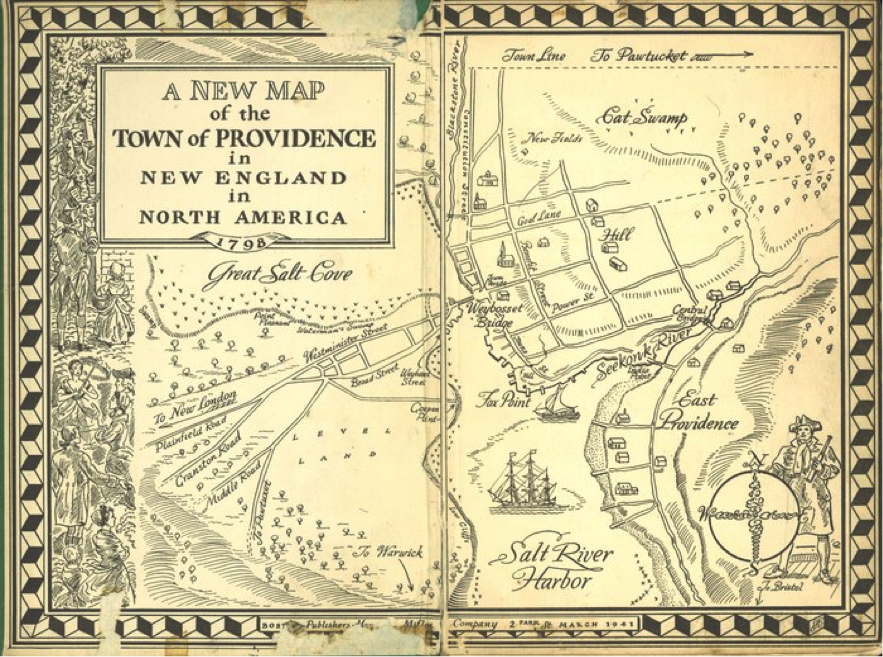 [a projection of Providence in 1798, created for the book Mill Stream by Hortense Lion (Boston: Houghton Mifflin, 1941)

In the 19th and 20th century, the maps became much better, of course.  Some maps tried to show what a place looked like from the sky, even before there were airplanes.  This link [http://maps.bpl.org/id/10162] shows Providence, growing very fast, in 1882.   You can zoom in to see the cove, the body of water Roger Williams settled near, by the old train station at the center of town.

Now, with satellites, we have an extremely precise idea of what the state looks like.  But it is still wise to view the map of Rhode Island as a work in progress.  We tend to think of maps as scientific measurements of place, fixed and unalterable.  Yet reality is more complicated.  Land and water features change, as rivers find new channels, estuaries expand and recede, and low-lying peninsulas go underwater.  Hurricanes can alter the map dramatically, erasing fragile features in a night’s work.  If you study old maps of Napatree Point in Westerly, at the extreme southwest corner of Rhode Island, you will see how much its shape changed before and after the hurricane of 1938.

Of course, nothing changes the map more than humans themselves, adding landfill, shoring up beaches, filling in ponds in some places, creating them in others.  Roger Williams would find much of Providence unrecognizable today.  Just consider how much change has come to the cove that used to be near his house, a body of water that still exists underneath and around the State House, and the channels that flow nearby.  Here is a map showing changes to the cove: 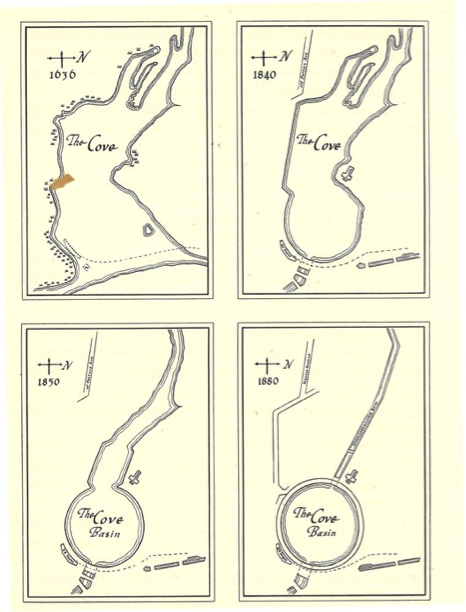 Humans can also change maps in other ways.  They sometimes change the names of places, for reasons that can range from real estate salesmanship to changing economic priorities (many old R.I. factory villages can be seen in 19th century maps, but have vanished from current ones).  In politics, the map of electoral districts changes as politicians draw new districts to keep up with changing demographic realities.  Other kinds of maps – zip codes, for example (invented in 1963) can be created for new purposes, like efficient delivery of the mail.

In other words, we need to keep our eyes open when looking at the map.

All of that is especially true in Rhode Island.  The state’s features are unusual to begin with.  Rhode Island may be small, but it is diverse, and the landscape changes from town to town.  There are farms, orchards and forests in the interior; cities and mill villages along rivers; suburban sprawl around greater Providence; and a striking variety of coastal communities, near tidal bodies of water that are always moving up and down.  Narragansett Bay is dotted with many small and large islands, including the original Rhode Island (Aquidneck).

How many islands, exactly, are in Rhode Island?  It is not easy to answer that question, partly because the answer keeps changing.  Some islands have disappeared over the centuries, including Starvegoat Island, which was near Field’s Point in Providence, but absorbed when Providence added landfill .  It can be seen in this unusual map, near the words “Providence River:” 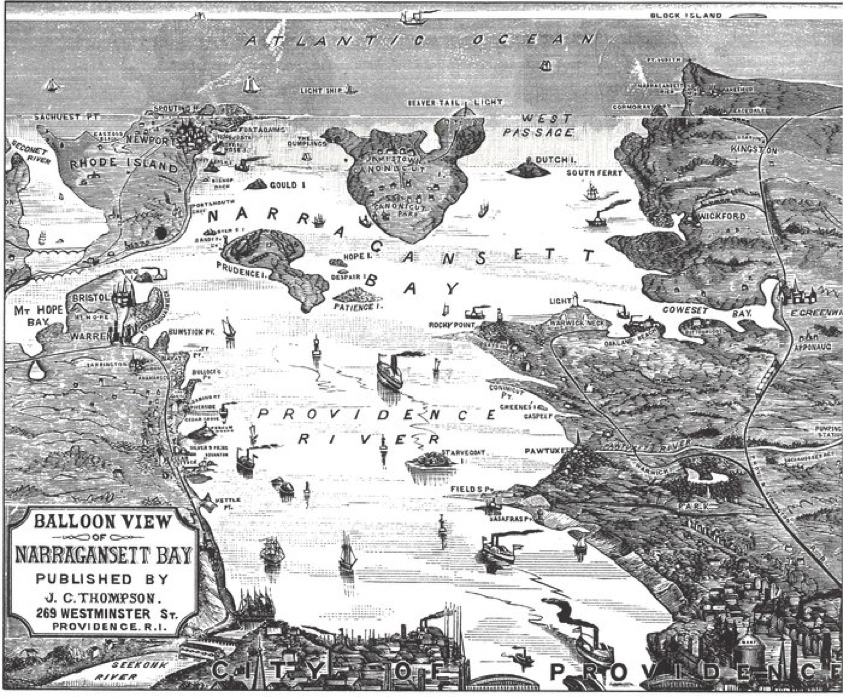 There is no particular logic to Rhode Island’s boundaries, which do not follow clear geographical features, like the Connecticut River that separates Vermont and New Hampshire.  They merely reflect agreements that were hammered out centuries ago between Roger Williams and his contemporaries.

A close study of these boundaries shows just how hard it is to draw a map.  Like many other states, Rhode Island has rectilinear boundaries in its northwestern and northeastern corners.  But its northeastern corner is awkward, and Rhode’s Island’s border with Massachusetts does not line up with Connecticut’s.  In the southwest and southeast, it is even more complicated.  Rhode Island’s southwest corner, which follows the Pawcatuck River, abandons the concept, and  meanders in a zigzag toward Little Narragansett Bay, where the state comes very near to Fisher’s Island, which belongs to New York.  In the southeast, a series of jagged lines south of Fall River define Rhode Island’s final corner, but they are hardly straight.   The boundary changed substantially in 1862, when Rhode Island relinquished land to Massachusetts (adding to Fall River), in exchange for new land that was added to Pawtucket and East Providence.

Changing maps will become even more of a reality as sea levels are expected to rise in the decades ahead.  That is likely to have a dramatic impact on a state so closely linked to the ocean.

Aerial photographs already show the parts of the shoreline that are affected:

This website, hosted by Rhode Island’s Coastal Resources Management Council, gives information and maps about how Rhode Island’s landscapes are continuing to shift.

To read a map well is a way to protect this small sanctuary and extend the legacy of Roger Williams for another generation.  We don’t need to make Rhode Island larger than it is, although some have tried to do that.  This map, for example, was hoping to impress people with how far Rhode Island business relationships extended: 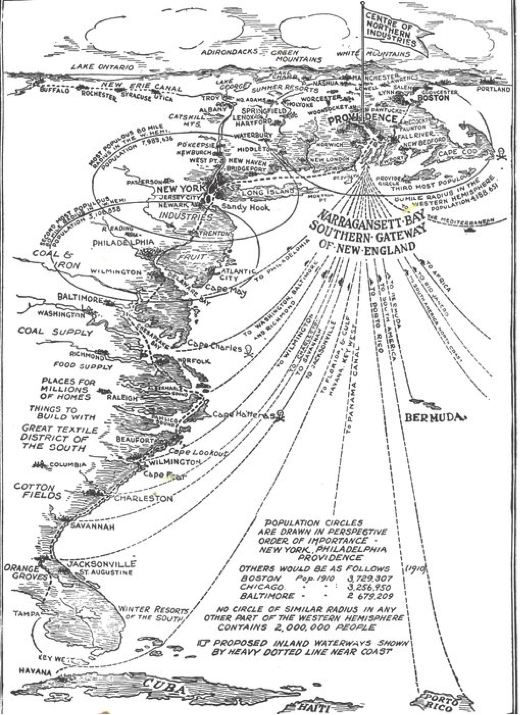 But to understand Rhode Island exactly as it is, with all of its unusual features, is a good beginning.  It may be small; it is certainly fragile, and it is always changing.  But thanks to Roger Williams, it is very much on the map.

Insurance Maps in the Collection of Brown University

Library of Congress Site about Portuguese settlement in Providence

Guide to the 1790 Fitch Map of Providence

Guide to the 1777 Powder Horn Map of Rhode Island

Boston and Beyond: A Bird’s Eye View of New England (Boston: Norman B. Leventhal Map Center, 2008)

J.B. Harley, “New England Cartography and the Native Americans,” in The New Nature of Maps: Essays in the History of Cartography (Baltimore: Johns Hopkins University Press, 2001)

Christopher L. Pastore, Between Land and Sea: The Atlantic Coast and the Transformation of New England (Cambridge: Harvard University Press, 2014)