Williams dared to imagine concepts that did not yet exist. When he arrived here, Rhode Island was a brand new idea, resisted by neighboring colonies and not yet approved by England. With patience and perseverance, he was able to translate his vision into reality. No other American state owes its origin so completely to one person inventing a new community from the ground up.

Why is there a place called Rhode Island?

When Roger came to his new home, “Rhode Island” did not yet exist.   Its creation was a remarkable act of imagination.  Not only did Roger Williams survive his banishments, he succeeded in willing into existence a new place, with a new name.   In fact, new names were very much necessary to help the colony come into existence.

Roger did not know that he was going to “Rhode Island” when he began to walk toward Narragansett Bay.  The lands around Narragansett Bay were known to the English, but they belonged to the Native Americans, a point that Roger had made clear in his earlier writings.  Through his friendship with the two Native tribes who lived on the eastern and western sides of Narragansett Bay, the Wampanoag and Narragansett, Roger was able to purchase several parcels of land, including the area around Providence, Aquidneck Island and Prudence Island.  When other settlers left Boston to worship more freely, Roger helped them to settle here.

After arriving, the English gave new names to these places, but they had Native American names as well.  Roger chose “Providence” for his town, because he was grateful that God had “provided” for him in his hour of need.  The settlers who went to Aquidneck began to call it “Rhode Island.” As Roger noted in a letter on May 1, 1637, Aquidneck was “called by us Rode Island.”  He spelled it that way.  In 1644, the assembly declared that Aquidneck would be known as “the Ile of Rhods or Rhod-Island.”

Why Rhode Island?  That question is not easy to answer.  As early as 1524, the Italian explorer Verrazzano had noted, in his first visit to Narragansett Bay, an island “in the form of a triangle, distant from the mainland ten leagues, about the bigness of the Island of Rhodes.”  Rhodes is an island in the Mediterranean, off Turkey, that belongs to Greece.

But to add to the confusion, Rhodes is not especially “in the form of a triangle.”  Block Island, however is.  Could it be that Verrazzano was referring to Block Island?  The shape of Rhodes is more like the shape of Aquidneck, but the words Verrazano used sound like they describe Block Island.

If we can call Verrazano’s use of “Rhodes” as the first time the future state’s name was used, then it is plausible to argue that Rhode Island is the second oldest state name after Florida.

The word “Narragansett” was often used as well to describe the region – for a long time, South County was called “the Narragansett Country.”  Most of the East Bay then belonged to the Plymouth colony.  It was not part of Rhode Island at all.  Those who wished to insult Rhode Island – and there were many – called it “Rogue’s Island.”  But having a name, even if people made fun of it, was better than no name at all.

From these modest beginnings, Roger began to see this region as something more than a cluster of settlements – as a real community.  It was clear that this was NOT Massachusetts, but it was not yet clear, in the early years, what it was.  Could Rhode Island become a new colony?  The need to define it only deepened as other settlers from Massachusetts began to cause problems for him, sometimes declaring their allegiance to the government in Boston.  In 1643, Roger went to England to defend his community and give it a better legal definition.  The “patent” that he secured from England’s Parliament did just that, explaining that “the Providence Plantations” was a real place.  In other ways, too, Roger and his neighbors began to imagine their new community – they designed official symbols of Rhode Island, such as the anchor, which is still a part of the state flag.  These acts of creativity were important.

The original design for the seal of Rhode Island, drawn by William Dyer in 1647 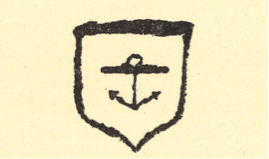 The Arms of Rhode Island as drawn by John Warner in 1648, Providence Town Papers

They also kept official records, and they acted as if they were something more than just random settlements of people who happened to live near each other.

Still, a stronger document was needed, especially since England’s government was changing during the English Civil War.  Roger went back to England in the 1650s to get more legal recognition, in partnership with John Clarke of Newport.  Finally, they succeeded.  In 1663, King Charles II of England gave to “Rhode Island and Providence Plantations” a magnificent charter, signed by the King, that declared Rhode Island a colony, explained its boundaries, and announced that it was a place where all were free to worship according to their conscience.  Because of its commitment to that principle, and because of its founder’s hard work and imagination, “Rhode Island” became a real name, and a real place.

Other Symbols of Rhode Island: 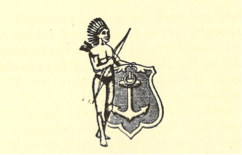 A 19th century version of the Rhode Island arms 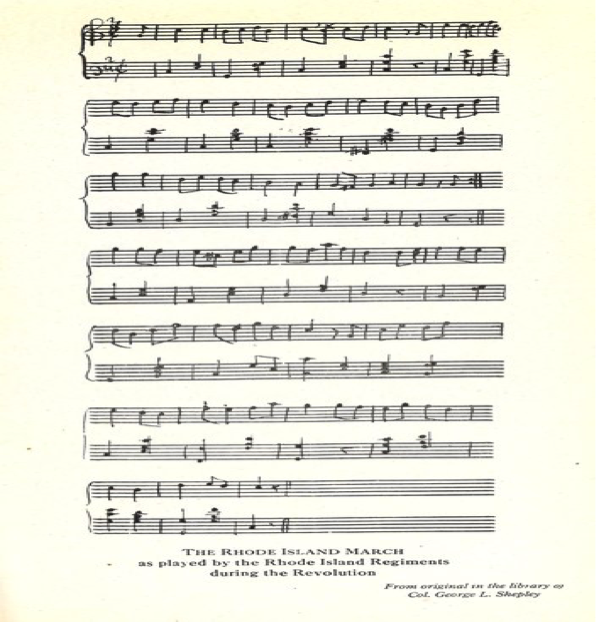 as played by the Rhode Island Regiments during the Revolution 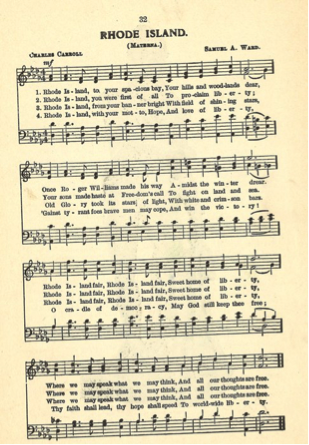 Sheet Music for a 1929 celebration of Rhode Island history