Canoes: The Ship of State

Without any likeness of Roger Williams to look at, artists in later centuries had to be creative – and as noted elsewhere, they imagined him looking like completely different people.  Sometimes tall and thin; other times, shorter and stockier.  On some occasions he had a moustache; most of the time he did not.

The scene that most of these artists liked to imagine him in was the moment he crossed the Seekonk River in the spring of 1636 – the moment we celebrate to this day as the founding of Providence, and by extension, of Rhode Island.

With the passage of time, we can see why that moment attracted the artists – a city and state were coming into existence, although that was not clearly known at the time.  It is fair to assume that Roger knew little more than that he had to vacate his earlier site at the request of the Governor of Plymouth, who considered that land to belong to them.

But that moment also presents its challenges to those of us seeking to understand the past.  We do not know the exact day he made the trip, and we do not know with certainty who accompanied him on the short distance from one side of the Seekonk to the other.  The famous greeting he received (“What Cheer, Netop”) also may be a later invention; it is reasonable to assume that Roger already knew the natives on both sides of the Seekonk, from his time there in the earlier spring of 1636.

These are the kinds of questions that historians like to ask themselves.  Unfortunately, we often have more questions than answers.

Another question the artists had to address related to the boat Roger was in as he made the crossing.  In nearly every instance, they placed him in a canoe – that is how we see him in the seal of the city of Providence. 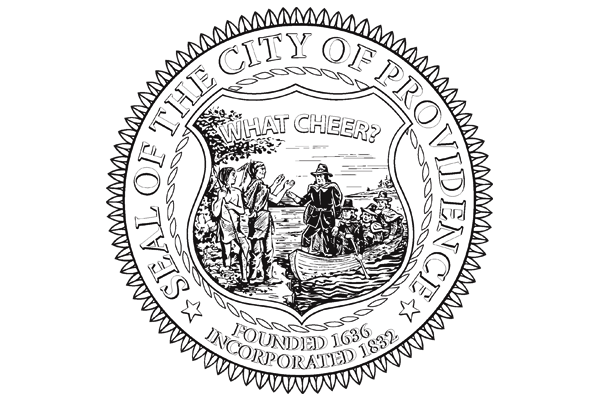 But how do we know he rowed a canoe?  Could it have been another kind of boat, more English?  Would he have rowed himself?  We know that he rowed himself all around Narragansett Bay – famously, he rowed all the way to Newport in 1672 to debate the Quakers.  Would he not have rowed the short way across the Seekonk, much the same as the college athletes who row crew on the Seekonk throughout the spring?

Most of the images, however, show him in a grander position – as someone standing in the boat, while others row.  This is more befitting the founder of a state. But is not reasonable to assume he would have taken a more active role in the first challenge of founding Rhode Island – namely, getting there? 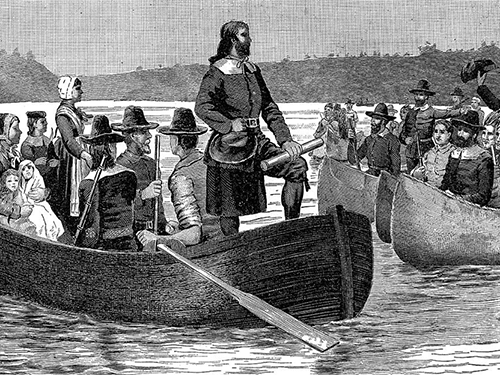 Engraving from a painting by C.R. Grant. Welcome Arnold Greene, The Providence Plantations for 250 Years, 1886.

Other images have different problems – this one makes it look like Roger was enjoying the pounding surf of Hawaii, rather than the relatively tranquil waters of Narragansett Bay: 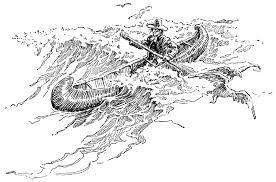 Still, the choice of a canoe is fitting for a founder who enjoyed good relations with the native Americans – and whose right to settle in what is now Providence depended on their blessing. Canoes were an important indigenous water craft, and Roger would have been familiar with them from his earlier experiences around Narragansett Bay.  Canoes came in an impressive variety of shapes and sizes – some were large and could carry dozens of men – they were nearly naval vessels and useful in raids.  Others were much smaller and nimbler – the vessels of individuals or small families.

To the native people, canoes were an essential means of transportation, built painstakingly from the available tools – wood, bark, and animal hides.  As Europeans began to encounter the natives, they were struck by their versatility on the water.  Canoes can be seen deftly navigating between the islands of Narragansett Bay in the first view of Rhode Island, a map that was printed in 1548, stemming from the explorations of Verrazano in 1524. 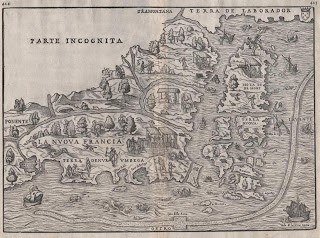 Many English artists captured the importance of the canoe, in drawings and in the margins of maps.  John White, visiting Virginia and North Carolina in 1585, created this image well before Rhode Island was settled: 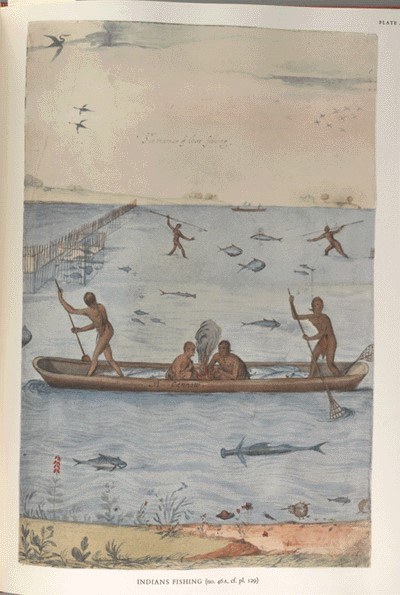 In his own writing, Roger often noted the importance of canoes.   When he described the Narragansett language in his Key into the Language of America, he included a rich variety of phrases to describe different kinds of canoes and small boats, made from various types of wood, including pine, chestnut and oak.  As he noted in his chapter “Of the Sea,” “some of them will not well carry above three or four, but some of them twenty, thirty, forty men.”  Roger also described the native skill at building boats, noting that he had often seen a native go into the woods with little more than a hatchet and some corn, and come out ten or twelve days later with a little boat that he had made.

Roger also described his own happiness traveling around the Bay by canoe, which was an important way for him to get to know the land, water, and people he lived near.  In a letter he wrote in 1638 to John Winthrop, he described the “lusty canoe” he used to go around the Bay, traveling up to twenty miles at a time.   In addition to all of his other accomplishments as a writer and thinker, Roger was an athletic young man when he came to Providence, and those qualities must have helped him in his early negotiations.

Recent scholars have begun to do innovative work around these subjects, pointing out that natives were as comfortable on the water as they were on land.  Two books in particular, by Christopher Pastore (Between Land and Sea: The Atlantic Coast and the Transformation of New England )and Andrew Lipman (The Saltwater Frontier: Indians and the Contest for the American Coast), go into detail about what the Bay, the rivers, and the Atlantic Ocean meant to the natives.

Local museums have also worked hard to preserve old canoes, which speak eloquently by themselves of what these craft mean to a people who needed them for everything from food to travel to war.  Elaborately decorated, exquisitely built, they were objects of great beauty as well as practicality.  At the Tomaquag Museum, two canoes can be seen, suspended from the ceiling. 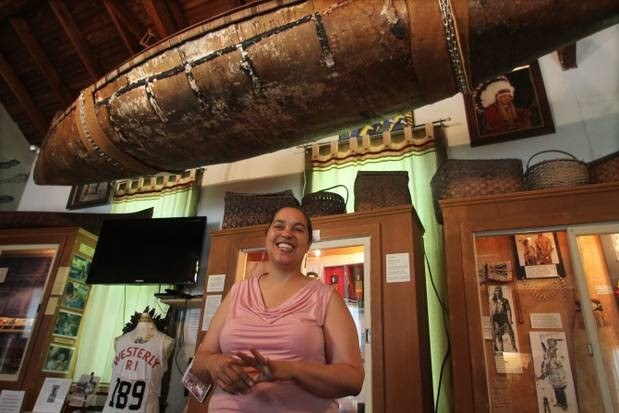 Loren Spears of the Tomaquag Museum, before a birch bark canoe. Photo Courtesy of Tomaqaug Museum.

In Connecticut, the Mashantucket Pequot Museum and Research Center has also done pioneering work on the canoe, including recent attempts to build canoes in the traditional way.  Details can be found on their website.

In other ways, too, we can try to hear the native peoples speaking, just as Roger did.  In the old treaty documents, which the sachems signed with drawings to represent themselves, some of the images used resemble canoes (although they also resemble bow-and-arrows). 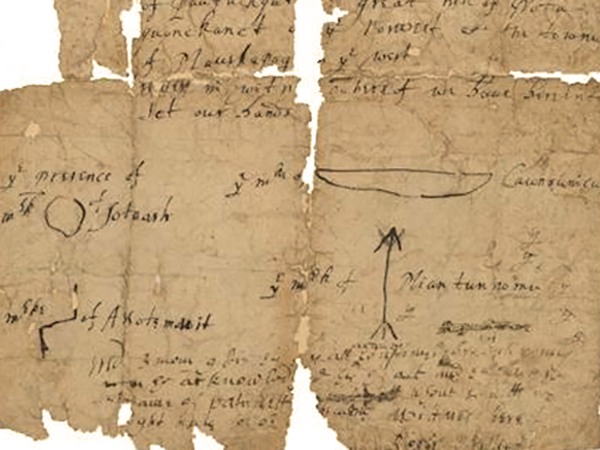 To the end of his life, traveling by water was important to Roger. To protect his colony, he needed to constantly negotiate with the Narragansett, Wampanoag, and the growing array of English settling around the Bay.  It is small wonder that he likened his community to a boat when he tried to describe describe the ideal of "liberty of conscience." in a letter to the town of Providence. After all, he had come by water in 1636, and water would remain eternally relevant to the Ocean State.

Andrew Lipman, The Saltwater Frontier: Indians and the Contest for the American Coast

Christopher Pastore, Between Land and Sea: The Atlantic Coast and the Transformation of New England

Roger Williams, A Key into the Language of America